Below is a 10min playlist of 16 videos highlighting my acting, music and DJ experience

As a professional actor, DJ and musician, I am always looking for ways of developing my various artistic talents and investigating how they can intersect. And, as a person of mixed ethnicity, I am particularly interested in projects that celebrate diversity, encourage accessibility and promote unity.

I see new media and technology as tools that we can use to create more inclusive and accessible spaces for self expression and participation while transcending traditional boundaries in both society and the arts. I am especially interested in exploring how virtual experiences might help create a more inclusive and just reality. I feel lucky to participate in the evolution of digital arts and new media and am eager to test it’s current and future limits.

My portfolio below will outline 3 project ideas I am working on with the above goals in mind along with brief summaries of my relevant artistic experiences.

This thesis project incorporates my extensive nightlife experience as a DJ and event producer. Imagine a virtual space and a real space, connected by screens and cameras. Now imagine these spaces are two parts of the same nightclub, where walls are like open windows, extending the reality of one party into another. In addition to providing a fun new environment in which to perform and socialize, this experience could raise awareness around important issues. While the party lures guests through the door, beyond it lies an open space to explore with AR-equipped cell phones and VR headsets, revealing creative works intended to spark interest around a theme, perhaps even inspiring conversations on either side of the club’s digital windows.

Welcome to HiveNBar, a real life dance space that is linked to a virtual dance space, with overlapping music and windows from the virtual world to the real and vice versa. Bangzheng Du, the visual artist who created the original Hive-N-Bar artwork, has generously given me his permission to use his creation for this project in exchange for promotion of his website, dbz.artstation.com

In addition to being a fun place to gather and interact, I’m interested in using this project to raise awareness of colony collapse disorder in honey bee populations. “U.S. beekeepers lost 43.7% of their honey bees from April 2019 to April 2020.” -https://earther.gizmodo.com/a-record-number-of-bees-died-last-summer-1844120999

I am also interested in creating other XR dance experiences that raise awareness of other pressing social issues. The goal being to entice people into shared spaces with the lure of a fun dance party, and allow their exploration of the spaces to lead to new insights and discoveries that I hope will encourage positive changes in the real world and even in the virtual world. 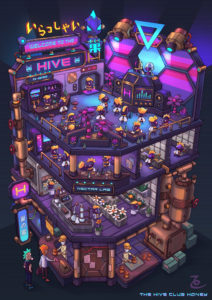 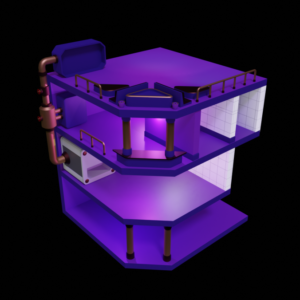 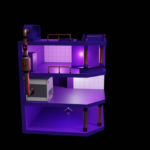 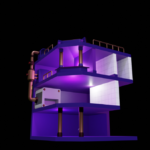 Right: 3D model I had made of Du’s original artwork for HivNBar VR experience

The idea for this virtual nightclub came from DJing during the pandemic and from the realization that quarantine will end for some sooner than for others. Since last March, most of my DJ performances have taken place on apps like Zoom and Youtube Live. While great tools for streaming live performances, they fall short in creating an interactive environment for audiences. Youtube Live does not have an option for users to display themselves, and on Zoom, many users choose to turn off their cameras because of privacy concerns.

When I pivoted to using VR for my shows, I realized that I could livestream my performance via Youtube Live onto a video wall in a virtual nightclub. Using body trackers, I have my digital avatar mimic my motions in the live stream. Perhaps most importantly, audience members are able to interact with each other and their 3D virtual environments in a much more natural way than on a livestream. They even have the ability to customize their sonic environments by adjusting the volumes of their speech, of individuals around them and of the performer’s music, all separately.

Performing at a concert in Los Angeles 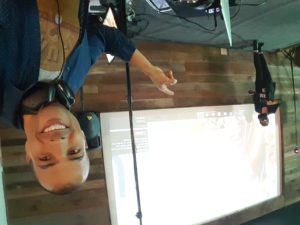 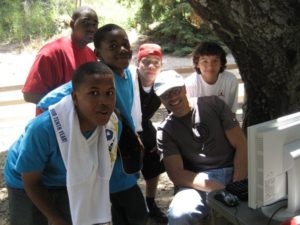 DJing a dance in high school 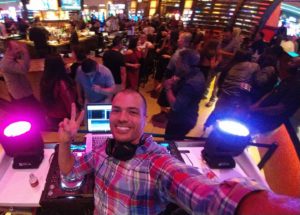 Musician, 1998-Present ethan-stone.com/music
Music experience ranges from musicals to church choir to rock and roll to electronic dance music. Frontman of folk rock group Sampson & Stone (alongside guitarist David Sampson.) Sing and play guitar, bass, keys and drums. Passionate song writer and activist. Worked as a professional guitar player on the TV show The Last Ship and in commercials for Rocksmith and REI. 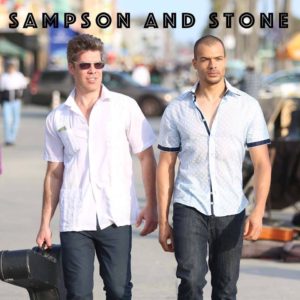 Below are 10 songs I recorded with my bandmate, David Sampson, for our self titled album, Sampson and Stone. I wrote the lyrics, sang lead vocals and co-produced all of these songs and wrote or co-wrote the music for 6 of them. I plan to use my skills as a musician and producer to create original music to accompany the projects I work on at DANM.

playing music in the studio 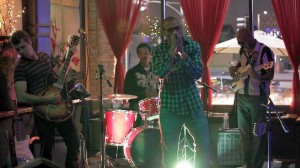 Sampson and Stone live at the Varsity, Los Angeles 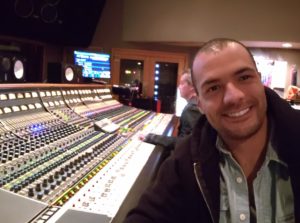 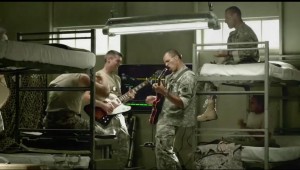 I am looking to expand on my theater based acting experience by integrating technology into a stage/vr production.

“Mind Prism” is a theatrical performance that uses a combination of live and projected elements. In a futuristic prison cell on an otherwise empty stage, we see Inmate– played by myself– and Cellmate, Inmate’s AI companion, whose digitally-projected avatar onstage is performed live by a differently-abled actor backstage. Throughout, Inmate works to befriend Cellmate to escape, not realizing the entire situation is a psychological exercise, designed to test whether a subject can be convinced that he is guilty of a crime he has never committed and thereby manipulated into self imprisonment.  In addition to confronting issues around the prison industrial complex, wrongful conviction and mass incarceration, I am also interested in promoting a discussion around the acceptance of differently-abled actors on stage and screen. Far too often, disabled roles are portrayed by non-disabled performers. I am interested in creating more opportunities for differently-abled actors to contribute meaningfully to the entertainment world.

The Tempest in VR

I hope to produce a live production of The Tempest entirely in a virtual reality of the Globe Theater. While most Shakespeare plays (including this one) have been performed in VR already, I am excited to take on such a project and bring my own unique spin to it. Drawing on my love of and extensive performance experience with Shakespeare, I see great potential in using the Bard’s works to “reimagine liveness in a radically interconnected world” (ARTWORK lecture, Marianne Weems.) I can’t think of a more radically interconnected space than virtual reality. With its timeless exploration of power, control, morality and even privacy, TheTempest is ripe for adaptation within our current digital age, in which social media giants, A.I., and Big Brother loom large. VR offers a way to “reconceive audiences as co-creators, engaged citizens and emancipated spectators,” (ARTWORK lecture, Marianne Weems) giving them the freedom to explore the performance space and even participate as extras in various scenes such as the play’s final celebration. Digitizing sets and wardrobe and allowing performers to work from home will lower production costs, which in turn means we can lower the price of admission, increasing accessibility. What’s more, VR presents an opportunity for non traditional casting in a manner unheard of in film, TV and theater, allowing actors from all walks of life the chance to play the role of their dreams.

Actor, 1993-Present imdb.me/EthanStone
Principal actor in over 50 national commercials including 5 spots as a spokesperson for Mercury Insurance. Principal roles in 14 TV shows including CSI: Miami, The Bold and the Beautiful and The Last Ship and 12 films including an adaptation of Shakespeare’s Henry IV Part I. Performed on stage in the title role of Othello, as Antigonus in The Old Globe’s production of The Winter’s Tale, Theseus in A Midsummer Night’s Dream and as the Scarecrow in The Wiz. 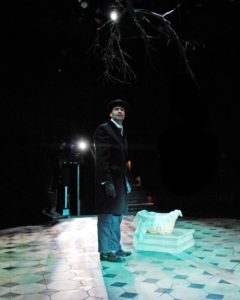 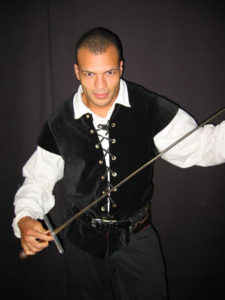 Performing as Antonio in Twelfth Night 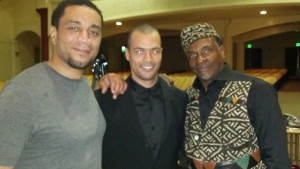 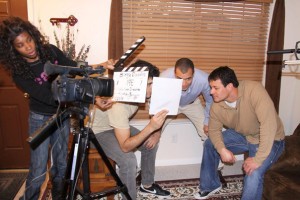 Between takes on the set of Single Daddies